As the 100th anniversary of Bentley University approaches, we celebrate significant changes in a century of the school’s history that reflect the growth and progress accomplished in one hundred years of global history. One of the most essential and ongoing Bentley transformations is the evolution of student life on campus that is a direct result of the growing diversification of the student body. Read below for more on a century of student life at Bentley University.

When the Bentley School of Accounting and Finance opened its doors in 1917, the 297 men enrolled in day and evening classes were expected to devote 4-10 hours of study time per class, every week in addition to working full or part time jobs. Despite the difference of 100 years, present-day students can also relate to the demands of balancing a job, an education, and free time. Although there was only one official social group at Bentley in 1917, today our school is home to over one hundred student governed clubs, groups and initiatives that play essential roles in the transformation of campus culture.

Student life at Bentley became an established facet of the campus when, soon after the school’s founding, three fraternities established themselves as the centers of social activity on campus. The first two fraternities at Bentley were Beta Tau Alpha and Kappa Pi Alpha, both formed in 1922. Beta Tau Alpha was known for its smokers and house dances and described as “a prominent contributor to the various currents of life at Bentley.” Kappa Pi Alpha was most known for the Spring Formal given every year during Commencement Week. The third fraternity established in the early days of Bentley is Alpha Gamma Pi, the only fraternity of the original three still active on campus. Alpha Gamma Pi was established in 1923 by a group of Jewish students and met twice a month to discuss cultural, social, and everyday life problems in the field of accounting. The fraternity also hosted three dances and a banquet each year. All three fraternities competed against each other in football, basketball and other sports in addition to jointly hosting an annual Interfraternity Formal Dance.

Click through the gallery to see “souvenir” pages of students outside of the classroom from the 1932 & 1933 benboo, the student yearbook 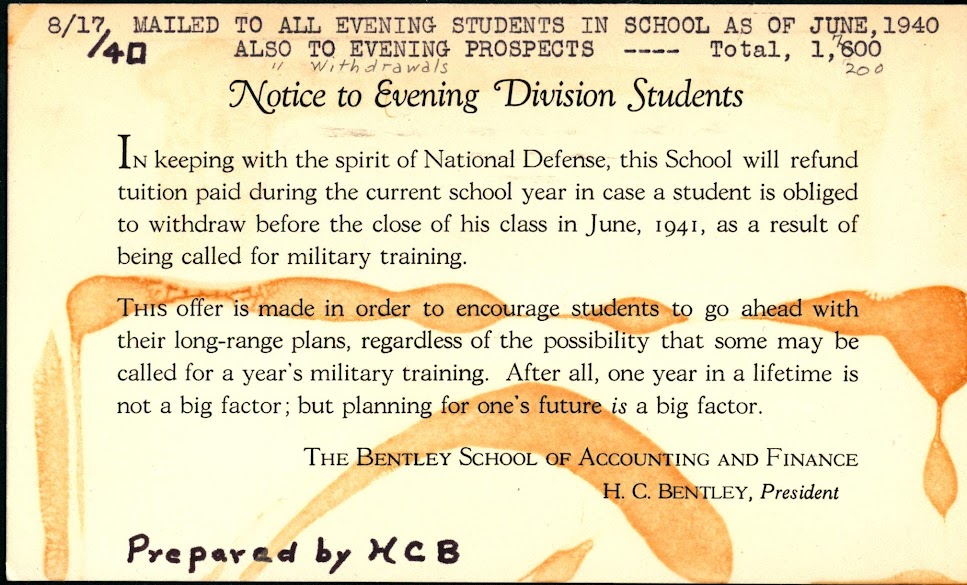 The twenty-fifth anniversary of the Bentley School coincided with the United States’ entrance into World War Two. With the enlistment of many young men in the war, Bentley began to enroll women interested in studying accounting and finance. This was only the second time women were admitted into the school; the first instance was during World War One. In 1945, Bentley officially became co-ed. The permanent admission of women created new opportunities for student life, including the creation of Delta Omega, Bentley’s first sorority. 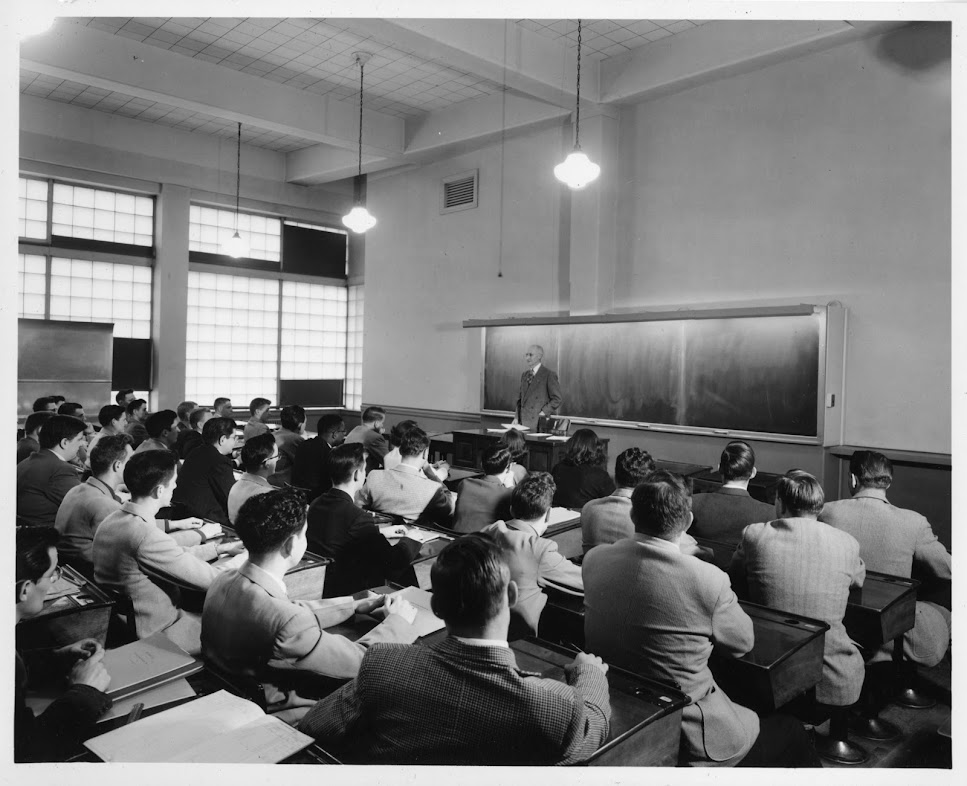 For a half century Bentley had been known as the School of Accounting and Finance and had been located in Boston. Six years before the school’s 50th anniversary in 1967, the school was authorized to grant Bachelor of Science degrees in Accounting and became Bentley College of Accounting and Finance in 1961. One year after the anniversary in 1968, Bentley officially moved to the new Waltham Campus. Upgrades to the school’s name, certification, and campus began a new era in Bentley history that included an increase in the number of female students, students of color, and international students. A more inclusive campus created opportunities for student clubs and groups that reflected the transformations happening around the school. In addition to the growth of Greek life on campus, religious, cultural, and political organizations began to assume large portions of student life at Bentley.

The first sorority on campus was Delta Omega, founded in 1944. The sorority was committed to creating a close union of women at Bentley. In addition to social events and activities, the sorority also engaged in charitable and community projects. The fraternities on campus were also involved in charitable works, namely the new Tau Kappa Epsilon.

The Young Republicans and Democrats student organizations were created to inform students on the principles of the G.O.P. and the Democratic Party respectively. The clubs held mock debates, elections and were known for encouraging political involvement on campus.

By the 1960’s there was a significant increase in the creative arts at Bentley. Two clubs that exemplified Bentley’s dedication to the arts were the Drama Club and the Annual Talent Show. The Annual Talent Show began in 1964 as a fundraiser for the Senior Class. Individual students performed and competed for cash prizes and student organizations competed for the Beaver Bowl. The Drama Club organized trips to see local dramatic productions and sponsored talks on the Theater. The club also presented one act plays in the annual Talent Show. Members were encouraged to take part in acting, costuming, lighting, makeup and many more activities associated with theater.

Bentley was also home to a number of religious clubs that catered to the spiritual and social needs of the students.

click on a photograph for more information on a religious club

The International Relations Club was the first of its kind on campus as it sought to understand the customs and principles of other countries and apply that knowledge to interpret current global events. The organization of this club and the emergence of other diverse student activities were evidence of the educational opportunities that continued to expand to students from diverse backgrounds. It was also the precursor to other cultural heritage clubs such as the Black United Body and the Armenian Club which formed in the 1970’s.

Student life at Bentley continued to expand and transform the campus culture and by the school’s 75th “diamond” anniversary in 1992, the school looked very different from its 1917 opening.

“The Bentley experience, like a diamond, is multi-faceted It incorporates studying, leisure time, friend-ships and the campus itself, as well as various other aspects of college life…” (1992 Vale Yearbook)

By 1992, there were several student groups that showed a dedication to the arts previously not associated with Bentley. Examples of this new dedication were theatrical performances put on twice a year and the formation of the Arts Association.

Bentley’s Diamond Anniversary also saw the emergence of another cultural club, La Cultura Latina, established to provide the Bentley student body with the opportunity to experience the diversity of Latin culture through social events and other activities. The Black United Body continued to expand and by 1992 was essential to promoting awareness of Black culture and issues on campus and aiding the administration in recruiting Black students.

There were also several new clubs at Bentley that reflected the diversity of students passions and interests; some of these groups  included the Environmental Task Force, Martial Arts, and Literary Club.

Student leaders recognized the importance of the school’s 75 year history, and made their own contribution by creating a student life time capsule! Check in with the Centennial website throughout the year to learn more about the capsule and its unveiling.

The centennial anniversary of Bentley marks one hundred years of growth and development that has changed Bentley’s landscape forever. Some additions to student life on campus since Bentley’s diamond anniversary include a multicultural center, LGBTQ  alliance, and a shared religious space, to name a few.

One hundred years after the founding of Bentley, the growth and evolution of student groups shows the school’s commitment to be more inclusive, provide students opportunities for self discovery, take pride in who they are, share their heritage, and learn about the world around them. We look forward to the next one hundred years of Bentley student groups that will continue evolving and shaping the future of the school.

For more information on student groups at Bentley visit
http://www.bentley.edu/campus-life/student-life.