Birthday Wishes All Around!

You probably know by now that Bentley University is celebrating its historic centennial year! What you may not know is that our official 100th anniversary is fast approaching. On February 26th, 1917, the first ever Bentley School class was held. Read on to learn more about this first meeting, and its unique connection to our founder Harry Bentley.

In early 1917, Harry C. Bentley was still working for the Boston University College of Business Administration. Harry had strong opinions about the direction of business education, and by February he’d found himself clashing with other BU administrators. In his own words, “I was fired or resigned, I am not sure which it was. At any rate I was without a job”! 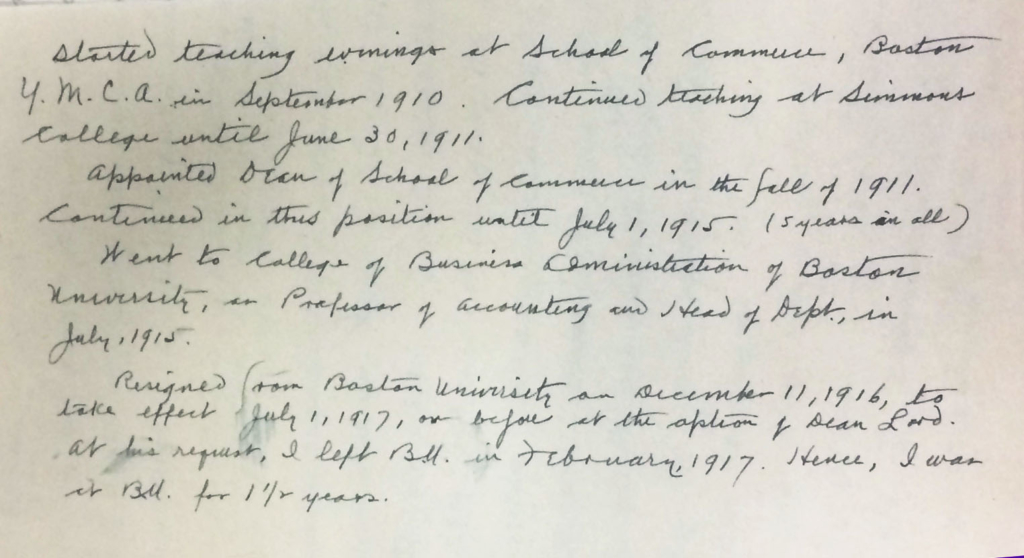 Mr. Bentley had a passion for teaching but was not sure what his next move would be. He had worked as an accountant, as a writer of textbooks and an administrator – options which were all still open to him. His students, however, worked quickly to ensure they would not lose their favorite teacher! Several of them visited Mr. Bentley to ask if he would consider continuing to teach them on a part-time basis.

The idea of teaching evening courses and having time for writing during the day appealed to Harry greatly. He told the students he would “see what [he] could do in meeting their complimentary request.” Luckily he very quickly discovered a room in the Huntington Chambers, then located at 30 Huntington Avenue in Boston’s Back Bay neighborhood. The photo below shows the building outlined in blue. It was only a block away from the Boston Public Library, still a relatively new addition to the city at that time. Other changes to Copley Square can be gleaned from the photo below; the pedestrian center in front of Trinity Church had not yet been created, and the future site of the Prudential Center (far right) was still a rail yard!

The Huntington Chambers, now the site of the Westin Copley Place Hotel, had a number of different functions. Its main room was a recital hall where musical performances and philosophical lectures were held. Throughout the building, a number of large and differently outfitted rooms could be rented by groups or individuals. Fannie Farmer, the New England food celebrity, ran her first cooking school out of a room in the Huntington Chambers starting in 1902.

In 1917, Harry Bentley was put in touch with the president of the Howell Women’s Whist Club who rented Room 410 at the Huntington Chambers. (Whist, for those who are not familiar, was a popular card game similar to bridge.) Since the Whist Club only used the room during the day, they were amenable to subleasing the space to Mr. Bentley during the evenings so he could teach classes. The room was sparsely furnished, mostly with card tables and folding chairs, but Mr. Bentley’s students were eager to learn from him in any setting.

And so, on February 26th, 1917 Mr. Bentley gathered with 29 dedicated students to hold the first ever class at what would eventually become Bentley University. Throughout that spring, Mr. Bentley taught this group three nights per week, and added an additional class on Saturday mornings for some of his fellow educators who wanted to study his teaching methods. By May, Mr. Bentley’s students had succeeded in convincing him that he needed to permanently establish his own school of accounting. Changes in the corporate tax code, as well as the emergence of the CPA exam, were creating an increased demand for business education. Mr. Bentley, with his entrepreneurial spirit and modern teaching practices, was just the person to seize such an opportunity.

The announcement of the official formation of the school prompted the 29 original students to form “The Bentley Associates,” a group that would become the backbone of the fledgling school. They worked diligently to promote the Bentley School and attract new students. As they advanced in their careers, they provided job opportunities to new graduates, and helped establish the Bentley School’s first alumni groups. Early advertisements and pamphlets for the Bentley School often mention the Associates as they were a uniquely dedicated bunch!

In the fall of 1917, the school moved from the Huntington Chambers to a rented room at 125 Tremont Street. Several other rooms and buildings were rented in the next few years to accommodate a fluctuating number of students as the school found its footing. Through it all, those who were present at the first class continued to support Mr. Bentley — and their numbers grew as the school produced new graduates. Bentley students had a fierce devotion to our first president, and recollections about him make it easy to understand why. 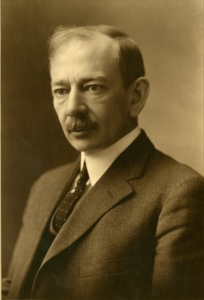 Our school’s connection to Harry Bentley is obvious — the name says it all! However, some facets of that connection are less well known than others. Did you know that Harry Bentley and his school have almost the same birthday? On February 28th 1917, only two days after he taught his first Bentley School class, Harry C. Bentley turned 40 years old. Quite a momentous week!

Many of Harry Bentley’s first students became friends who remained invested in the success of the Bentley School throughout their lives. This was in part due to Mr. Bentley’s unique personality! He was described by many as a humorous man with a strong sense of loyalty, who was always encouraging others to push themselves to their greatest potential. He had strong passions for both sports and art – showing as much enthusiasm for a Boston Braves game as he did for Puccini’s La Boheme. He helped students prepare for the business world by giving them tutorials on social etiquette and interview techniques, and he was known to give personal loans to students struggling with tuition. In a testimonial from the Bentley Associates, he is described as having “an 18 karat spirit of friendship.”

Mr. Bentley eschewed personal fanfare and did not frequently allow the school to bestow formal recognition on him. However, the closeness of the school’s anniversary to Mr. Bentley’s own birthday meant there was often an opportunity to celebrate the two simultaneously. In 1942, the school prepared to celebrate its 25th anniversary, and secretly planned a birthday party for Mr. Bentley!

By the time the school’s 50th anniversary arrived, Mr. Bentley was 90 years old. He had served as president of the school from 1917-1953, and remained involved with the school through the rest of his life. He wrote to Presidents Lindsay and Morison about his thoughts on the development of the school, and kept former students informed about his enjoyable retirement in San Diego. Although his health prevented him from attending the lavish 50th anniversary party held at  the Boston Sheraton, the school still presented gifts in his honor and even had two separate “birthday” cakes!

Our 75th anniversary brought another exciting collaborative celebration. President Joseph Cronin helped to establish Founder’s Day, now a well-known Bentley tradition. The first Founder’s Day ceremony was held on February 26th, 1993 and Dean Rae Anderson made remarks about the life and work of Mr. Bentley. To this day, employees who make a lasting impact on the Bentley community receive the Founder’s Day award on an annual basis.

Now, during this historic Centennial Celebration, we have the opportunity to once again celebrate our school’s legacy and our founder’s life at the same time. This Tuesday, February 28th 2017, a day long celebration will take place across campus. We’ll unveil the 1992 time capsule, have a campus-wide scavenger hunt, and celebrate Harry Bentley’s 140th birthday with a party in the Student Center. Bentley community members will have a chance to learn more about Mr. Bentley, and to add to our Centennial Time Capsule so that they can become part of these historic traditions!

In this video, you can hear remarks delivered by Harry Bentley at Commencement in 1950.