These days, Bentley and Waltham are a natural pair — we’ve been occupying our Falcon nest atop the hill for almost fifty years! But in the early 1960s, with the rapid development of Boston’s Back Bay neighborhood and the need to accommodate more students, Bentley’s leaders had to think hard about moving the school to a new location. Surveys were conducted, sites were viewed, and ultimately the decision was made to purchase nearly 100 acres of the Lyman Estate in Waltham. Below are some of the photos and documents that help tell the story of this transitional period, as Bentley began to imagine itself outside of Boston.

By the late 1950s, it was clear that Bentley would need to look seriously at its campus facilities if it wanted to grow into a fully-accredited, four-year college. While the city campus gave students easy access to the business center of Boston, there were other factors that grew overwhelming. Just across the street from the main academic building was a vast rail yard, which can be seen in the photo above. The rail yard posed its own challenges – early students remember the loud noises of engines and horns, as well as the dust and smog in the area that were kicked up by constant traffic. By the early 1960s, the rail yard had been turned into an active construction site for what is now the Prudential Center and Hynes Convention Center.

The heavy construction brought parking issues, skyrocketing rents, and for many students a level of noise and bustle so loud they were unable to properly focus on their difficult courses of study. Presidents Harry Bentley and Maurice Lindsay began working together with the help of the Board of Trustees and trusted staff members like Thomas Morison (who would soon become Bentley’s third president!) to begin the search for Bentley’s new home.

Bentley’s leaders knew that the early success of the school was due in large part to the talent and dedication of its students, faculty, and staff. In choosing a new campus, they were keen to have everyone involved in the decision-making process. As you can see above, school administrators extensively surveyed members of the Bentley community to learn about their needs and preferences for a new campus. While some were reluctant to leave behind the convenience and industry in downtown Boston, many students felt their needs could be met in a more suburban location.

Site visits were made all across Massachusetts, as this letter from President Lindsay indicates. On everyone’s mind was finding a space that would allow the school to grow over the coming decades, while still providing the convenience and accessibility that Bentley students expected. It was only after the search had been underway for quite some time that the Bentley leaders heard of potential land for sale in Waltham. The land in question was part of the Lyman Estate, which was popularly known as “The Vale.” The estate was purchased by the Lyman’s in the late 1700’s, and part of the land became the site for the Lyman Mansion, which still stands today. 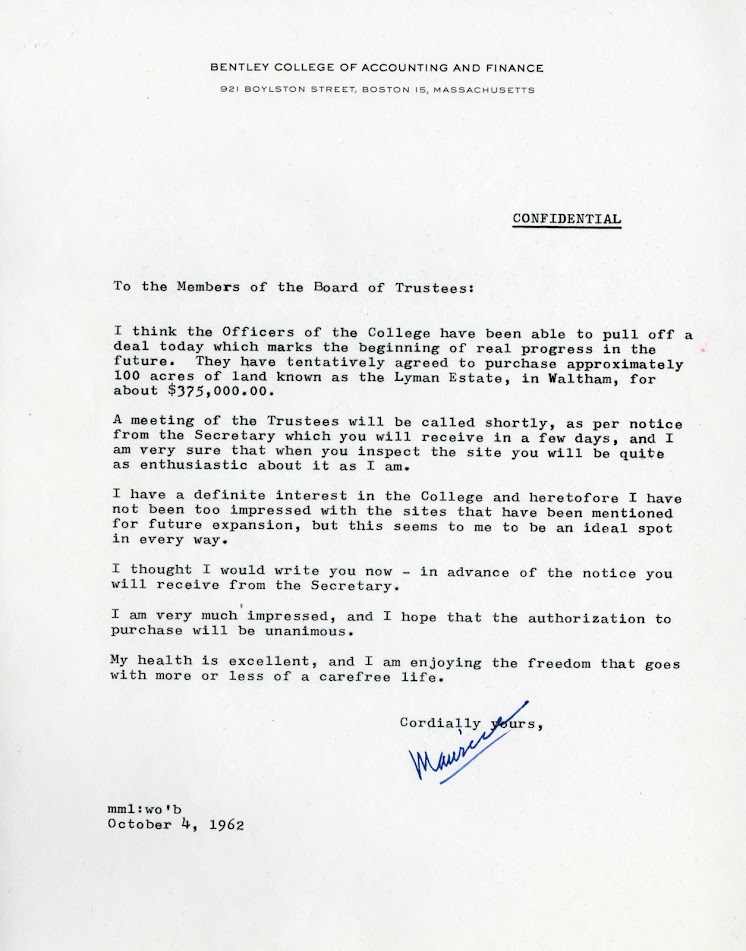 The plot of land for sale was large, nearly 100 acres, giving Bentley plenty of room to expand its resources over the years. It was picturesquely situated and yet offered the convenience of nearby public transport and highways. By the end of 1962 the Trustees had authorized the decision and Bentley’s new president, Thomas Morison, sent the letter below confirming purchase of the estate land and signaling the beginning of a new era in Bentley history. 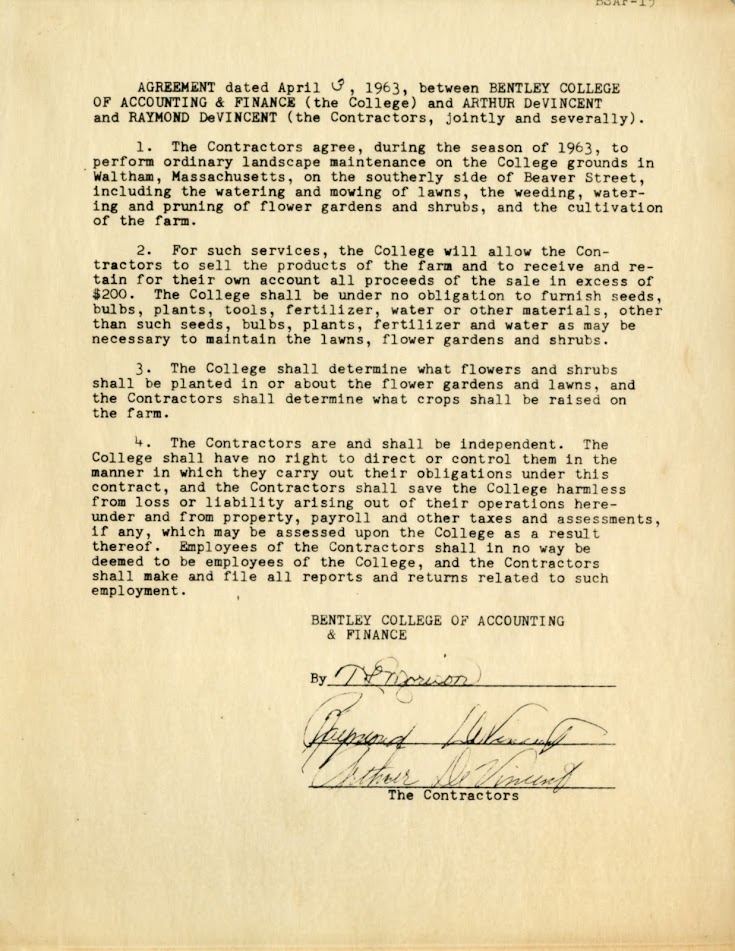 As design work got underway, Bentley leaders knew they would need a dedicated team to take care of the sprawling grounds. Some of the first caretakers of Bentley land were the DeVincent’s – brothers and owners of a local farm. If their name sounds familiar, it’s because nearly 40 years later, in late 1998, Bentley purchased that same farm! The DeVincent land now serves as part of Bentley’s athletic complex.

Over the next two years, designs for the campus were created and re-created as everyone worked together to realize a collective vision for Bentley’s future. Engineers, architects, and designers considered how to preserve the site’s amazing views while creating a coherent layout that would serve the Bentley population well. Below, you can see one of the original ideas for the campus which looks much different than where we ended up!

By early 1964, the campus plan had been refined, and looked almost exactly like what was eventually built. In the photo above, you can see the last vestiges of one of the original plans. The large ring of dormitory buildings would have been located near the Forest Street entrance where much of our parking is currently located. The angled design, however, did live on in the curved look that was eventually given to the Tree Dorms!

As 1964 came to a close, the design of the Waltham campus was finalized, and plans for funding and construction began. The official groundbreaking ceremony was held in April of 1965. It has been over fifty years since the purchase of the Waltham land, and in that time Bentley’s footprint has expanded to accommodate the growing residential and academic needs of the community. The center of campus, though, with years of planning and design behind it, remains largely unchanged.

Keep an eye out for more campus profiles in the future! We’ll be showing you where you can visit old Bentley sites in downtown Boston, and sharing stories of the construction of our expanded Waltham campus. Don’t forget that just down the road you can still tour the Lyman Mansion and greenhouses thanks to Historic New England!