All of us in the Bentley University community were saddened to learn of the passing of Chancellor and President Emeritus Gregory H. Adamian on November 21st, 2015. Mr. Adamian served as Bentley’s fourth president from 1970-1991, and he navigated Bentley through decades of tremendous growth and change. This memorial exhibit highlights some of President Adamian’s formative work at Bentley, and contains a number of photographs and documents that help illuminate his life.

Dr. Gregory H. Adamian was born in Somerville, MA to Sandy and Adam Adamian on September 17th, 1926. He was raised in Brooklyn, NY and attended Midwood High School. He graduated with his B.A. from Harvard University in 1947, after pausing his studies for a year to serve the Navy as a navigation officer in the Pacific Southwest.

In 1951, Dr. Adamian received his juris doctorate from the Boston University School of Law, and then earned an M.P.A. at Harvard’s John F. Kennedy School of Government. After many years of prestigious education, Dr. Adamian began to practice law in 1952 and soon after began serving as a lecturer at Suffolk University. In 1955 his relationship with Bentley began, as he became a part-time lecturer in economics and business law. He continued to practice law during his professorship, and by 1965 he was chair of Bentley’s Law Department. 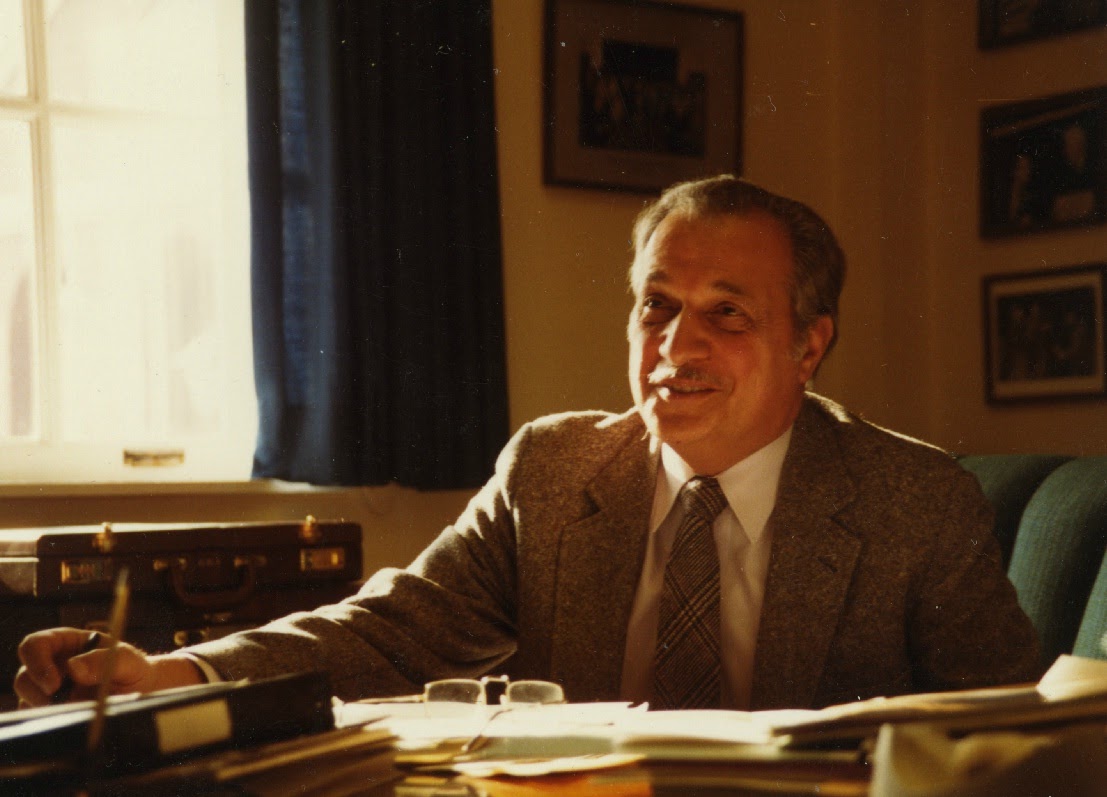 He was elected President of Bentley College in 1970 and immediately began the effective, enthusiastic work he would be known for in the ensuing decades. This exhibit focuses on Dr. Adamian’s time at Bentley, but his contributions remained far-reaching throughout his life. He was known particularly for his involvement in the Armenian community, working with local Armenian parishes and organizations, and helping to establish the Committee for the Resettlement of Armenians in the United States. He also worked with organizations involved in higher education; he served as the chairman for the Association of Independent Colleges and Universities in Massachusetts, and as a board member for the Massachusetts Higher Education Assistance Corporation.

Dr. Adamian is survived by his wife Deborah, sons Douglas and Daniel, and five granddaughters. 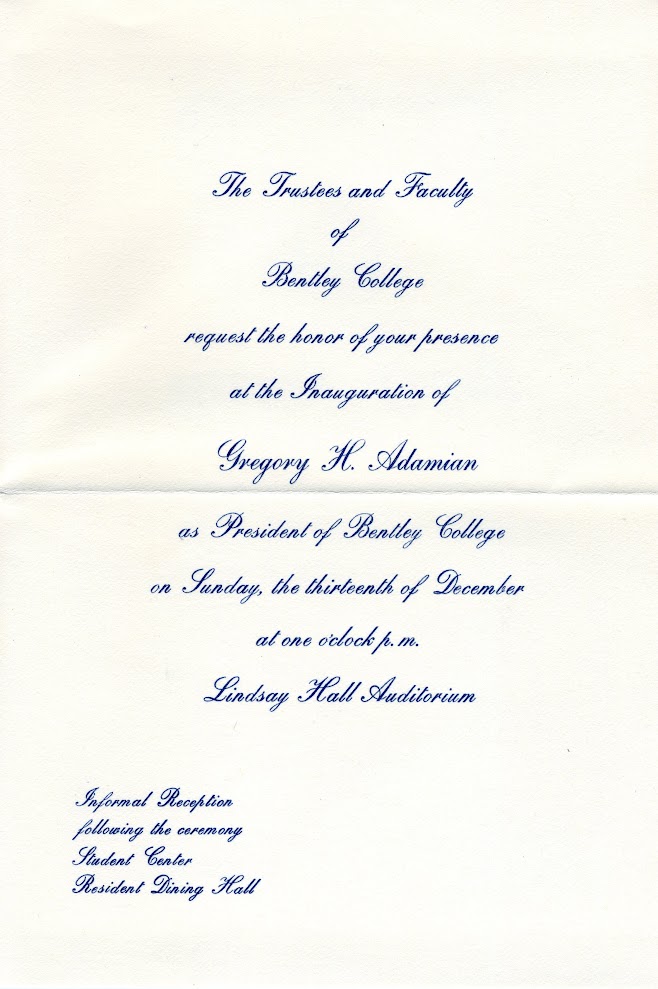 Dr. Adamian’s inauguration as Bentley’s fourth president took place on December 13th, 1970. Because he was already so much a part of the Bentley community, Dr. Adamian made a very smooth transition into his new role, and already had many goals in mind for Bentley’s future.
In a letter to Trustee Henry E. Rauch dated September 22nd, 1970, Dr. Adamian writes,

“…rest assured that I am keenly cognizant of the trust and responsibility you have placed upon me by your vote of confidence electing me as the fourth President of Bentley College.Together we will rise to the challenge of the Seventies and forge ahead to continue the success of Bentley College in even wider horizons.” 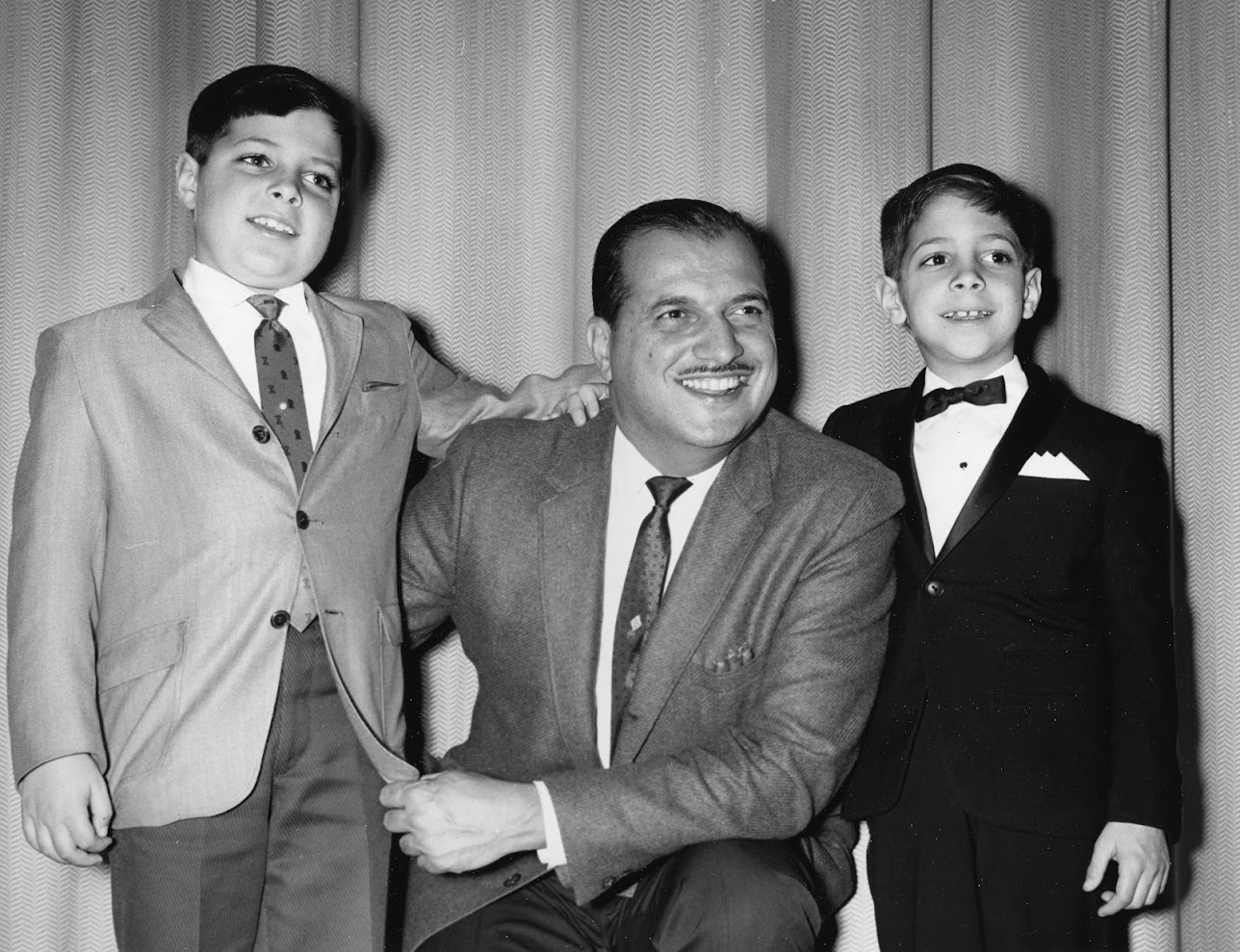 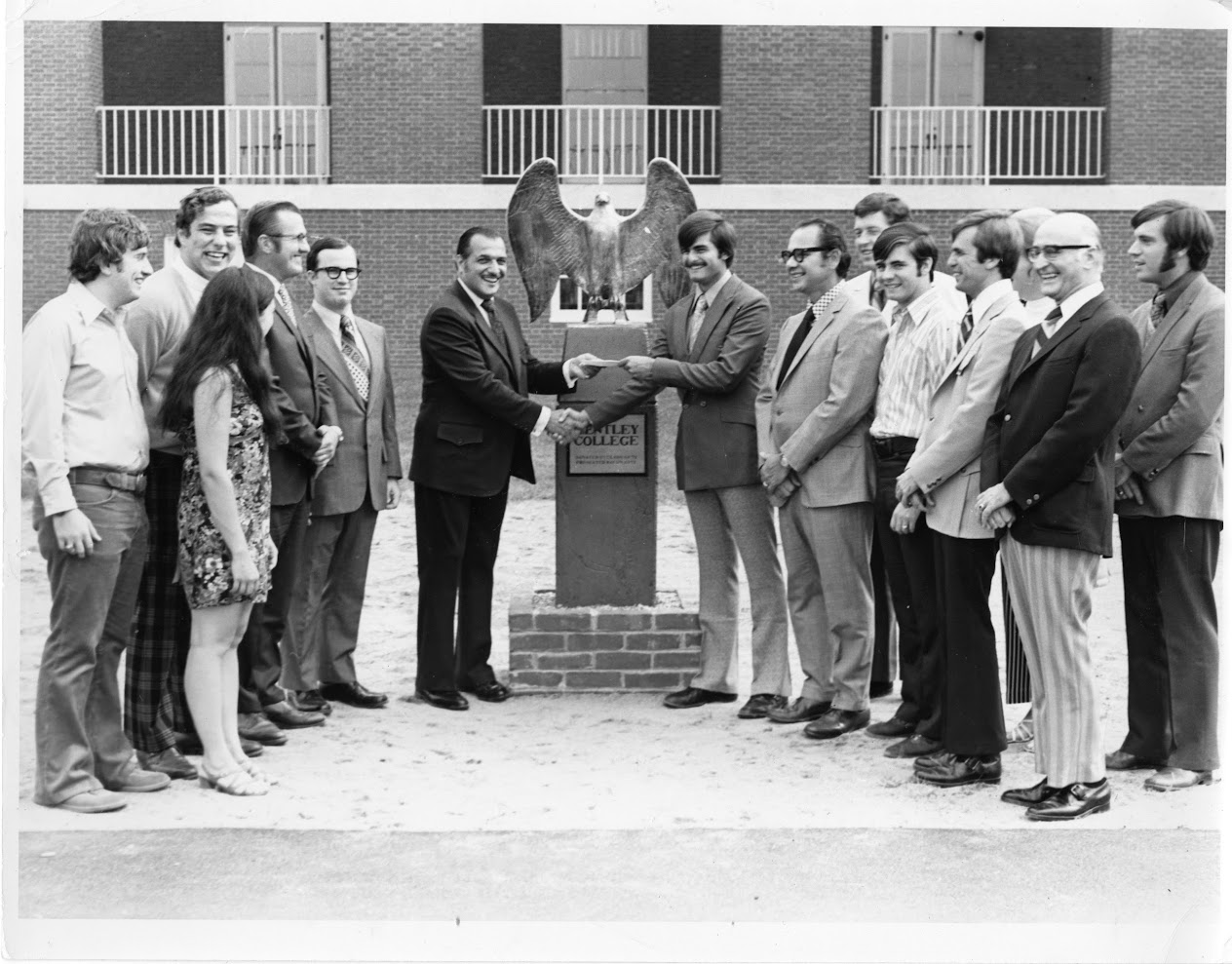 One of Dr. Adamian’s first acts as president was the establishment of a regular President’s Newsletter. The first of these newsletters can be seen in the next photo. Its purpose was to keep all Bentley community members in the know about new developments at the school, and was a valuable resource during a time of great change. 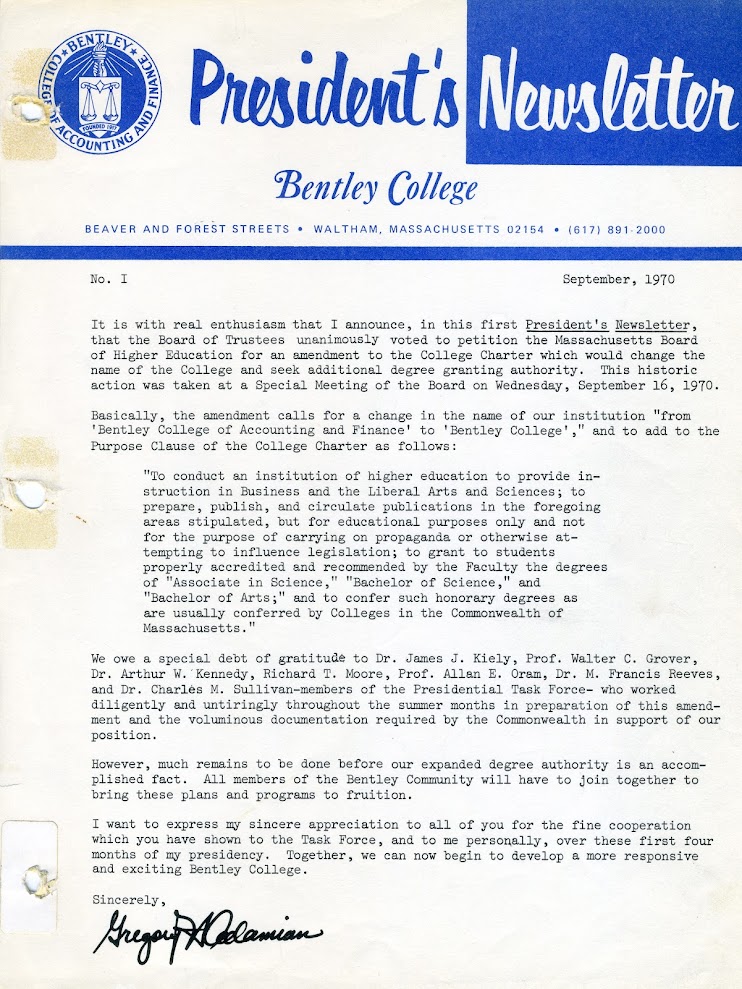 In this, his first Newsletter, President Adamian announces the petition to amend the College Charter, a move that would result in expanded degree-granting capabilities, and a name change from “Bentley College of Accounting and Finance” to simply “Bentley College.” He also asks all Bentley community members to “join together to bring these plans and programs to fruition.”
In his twenty-one years as President, Dr. Adamian ushered in sweeping changes to Bentley’s educational landscape. Here he is pictured with his assistant Richard Moore (R) presenting the petition to amend Bentley’s degree-granting authority to then MA Secretary of State John Daveron (C). 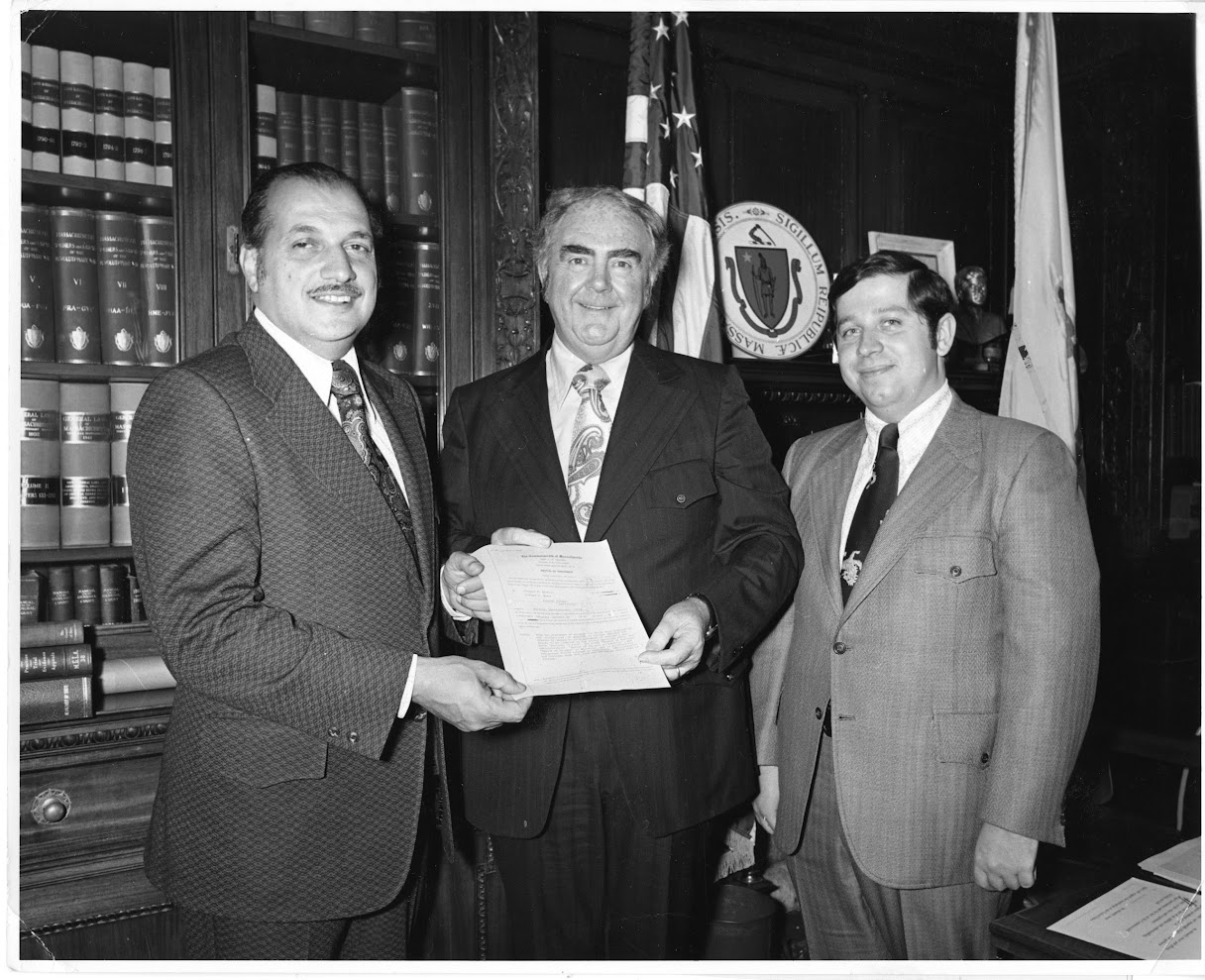 The changes that President Adamian helped to enact in the early 1970’s allowed Bentley to begin offering a Bachelor of Arts degree and an expanded slate of Bachelor of Science degrees.
Also included were graduate degrees – initially a Master of Science in Accountancy and a Master of Science in Taxation. This change allowed Bentley to establish its Graduate School, which today offers a number of programs to over 1,000 students.
In 1976 President Adamian also helped in establishing Massachusetts Business Ethics Week, a catalyst for the Bentley Center for Business Ethics, another part of life at Bentley that continues to thrive to this day.

Through all of this development, President Adamian’s focus remained squarely on the Bentley students. He often spoke of wanting to offer them the most comprehensive and valuable education available. As a former professor, he understood the importance of fulfilled, engaged students. 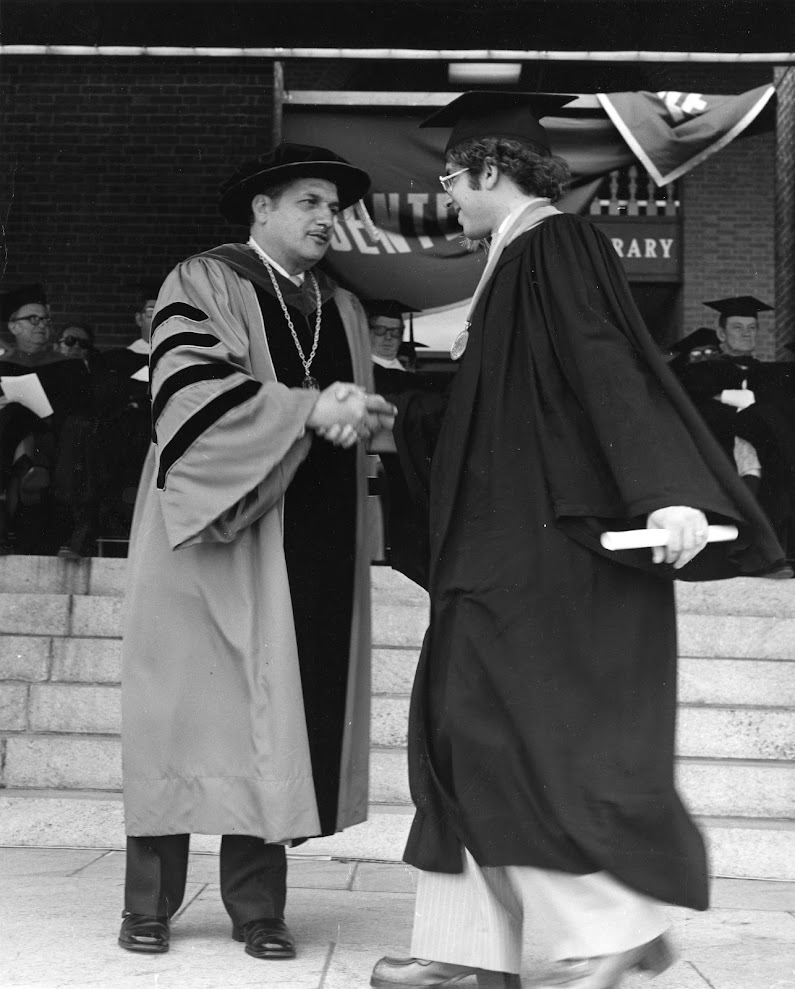 In a 1976 article he speaks about the value of providing business students with a liberal education. He says,

“Our aim is to have persons educated in the business area who are cognizant of life and all its ramifications. We used to tell students ‘after we teach you everything about money, we teach you money isn’t everything.'”

President Adamian also demonstrated a commitment to technology that has had positive lasting effects on our community. In 1984 he announced his intentions to bring “computer fluency” to Bentley to ensure that students, faculty and staff would be well-prepared for the future. 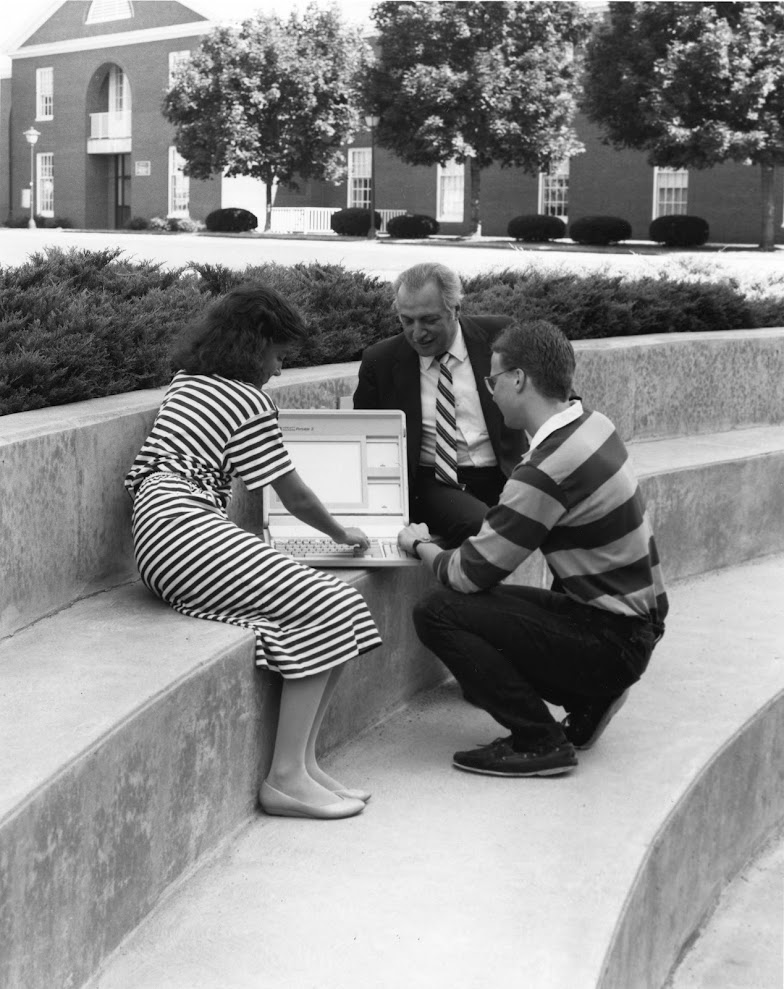 In 1985 he helped to launch a pilot program wherein freshman students in select programs would receive personal laptops. In the photo at right, President Adamian is seen with two Bentley students and a Portable Vectra CS laptop. By the time this photo was taken in 1987, the laptop program had expanded to all Bentley students, and it continues to this day.

The practical, financial future of Bentley was also very important to President Adamian, who had seen firsthand the educational caliber of the school and wanted to ensure its continued success.

He worked tirelessly to increase Bentley’s endowment and raise funds for the new programs and facilities that would make Bentley even greater. During a particularly successful period in the 1980’s, the Bentley campus saw significant expansion. Athletic facilities were improved and new dorms like Collins Hall, then known as Brook Hall, were built.

The Bentley President’s House was also built in the early 1980’s. In a photo above, President Adamian and his wife Deborah, the house’s first occupants, celebrate its completion.

In a letter to the Class of 1979, President Adamian speaks to the development that has already occured at Bentley, and the innovations he hopes to see in the future. He says,

“Many of these changes were brought about with significant advice and help from you, the students. As this College has shaped and molded your knowledge and character, so too have you contributed to what is excellent and enduring in this institution today. For years to come students at Bentley will profit and benefit from the changes you helped to create.

In 1991, Dr. Adamian made the decision to retire after 21 years of devoted service as Bentley’s fourth President. When he transitioned into the presidency from his role as a professor in 1970, Bentley had only recently opened its doors in Waltham. As he left, enrollment at the school had doubled, Bentley had a thriving graduate school, and all students had the op 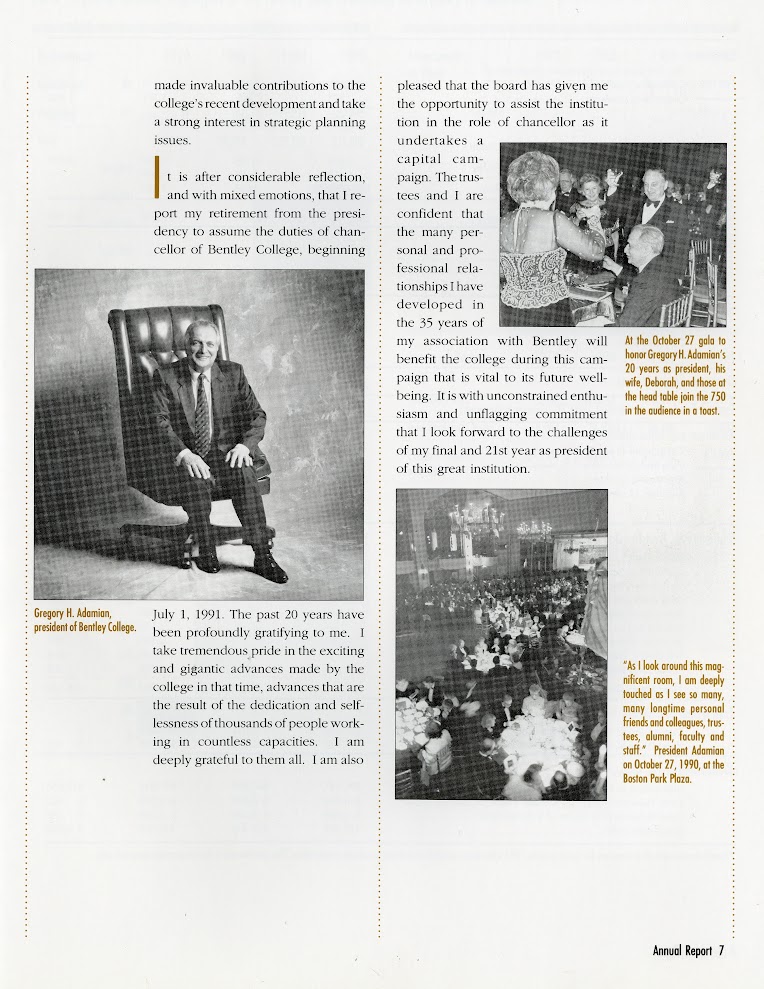 portunity to engage with a robust liberal arts curriculum supported by modern technology.

On the left, President Adamian announces his plans to retire in the 1990 Annual Report. He said that he took “tremendous pride in the exciting and gigantic advances” made during his tenure, and that he looked forward to his last year in office “with unconstrained enthusiasm and unflagging commitment.”

Upon his retirement in 1991, President Adamian received honorary degress from both Bentley and Boston University. 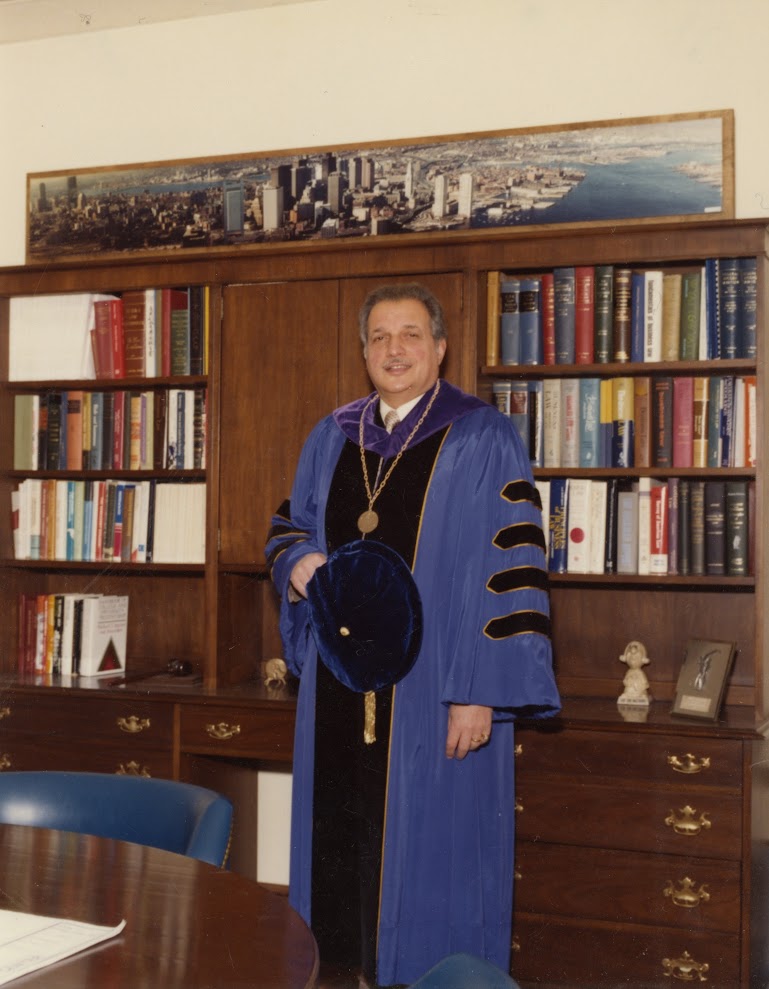 The trustees of Bentley asked that President Adamian continue to serve as Chancellor and President Emeritus, and he was a dedicated voice for Bentley as an ambassador and a fundraiser. As the college entered another significant fundraising effort in the early 1990s, President Adamian proved invaluable in continuing to secure the future well-being of Bentley.

He retired from the Board in 2002, and was given the title of Trustee Emeritus. His relationship with Bentley, however, did not end. He was a regular fixture at Bentley Commencement, proudly attending every ceremony from 1955 to 2015. He was also a respected member of the higher education community, continuing to contribute his knowledge and enthusiasm through his later years. 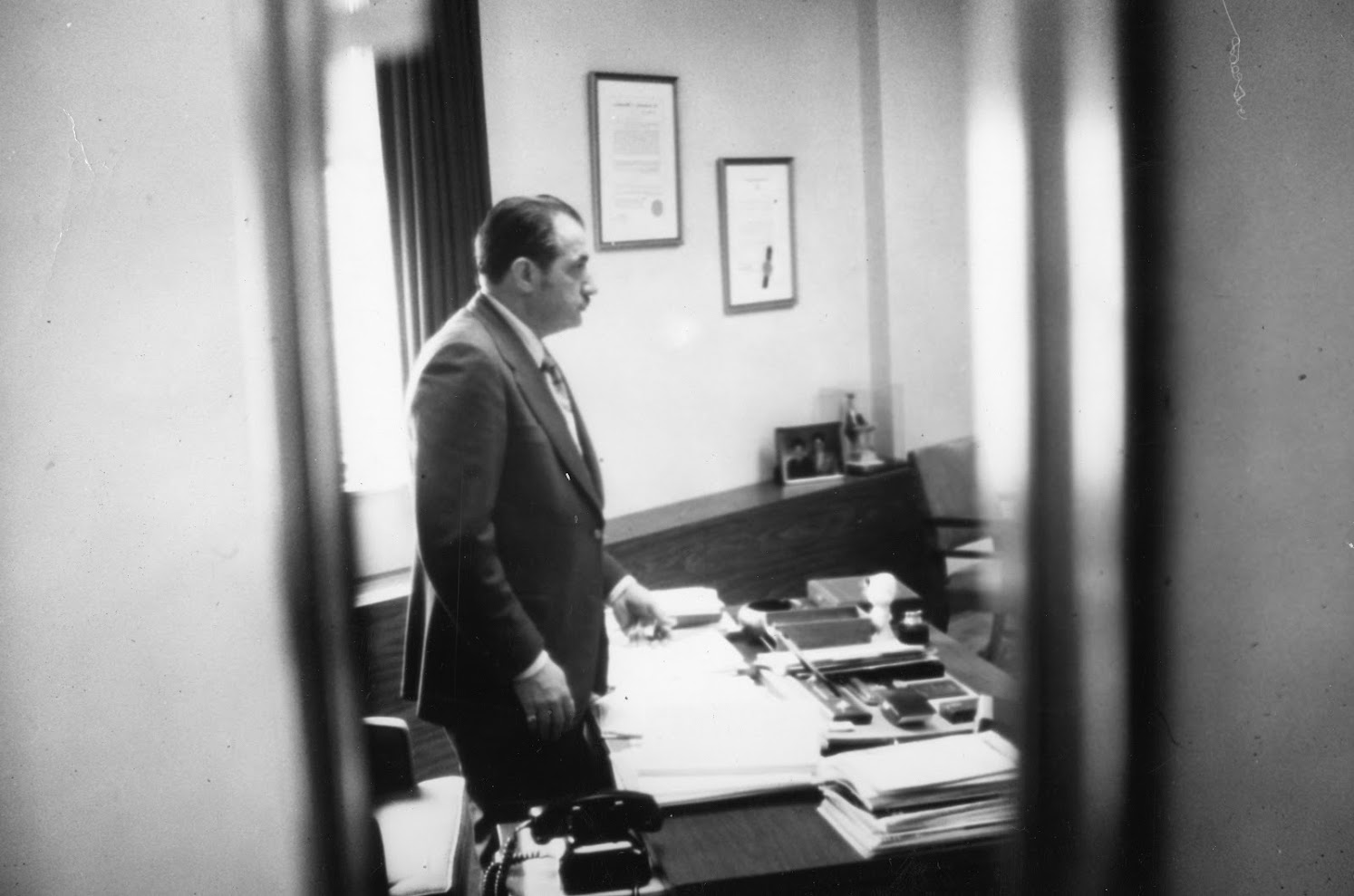 Brilliant professor, visionary president, pioneering chancellor and esteemed trustee, you have contributed enormously to all aspects of Bentley College. Your extraordinary devotion and tireless effort, spanning six decades, established a foundation on which your successors have built, and will continue to build, far into the future. This board, and indeed the entire Bentley community, has benefited in countless ways from your professional wisdom, abiding love for the college and true concern for the people who study, teach and work here.